I just go by my first name, Thien Kim, otherwise affectionately known as Meera & warrior poet(ess), respectively, on the streets in my current hometown. 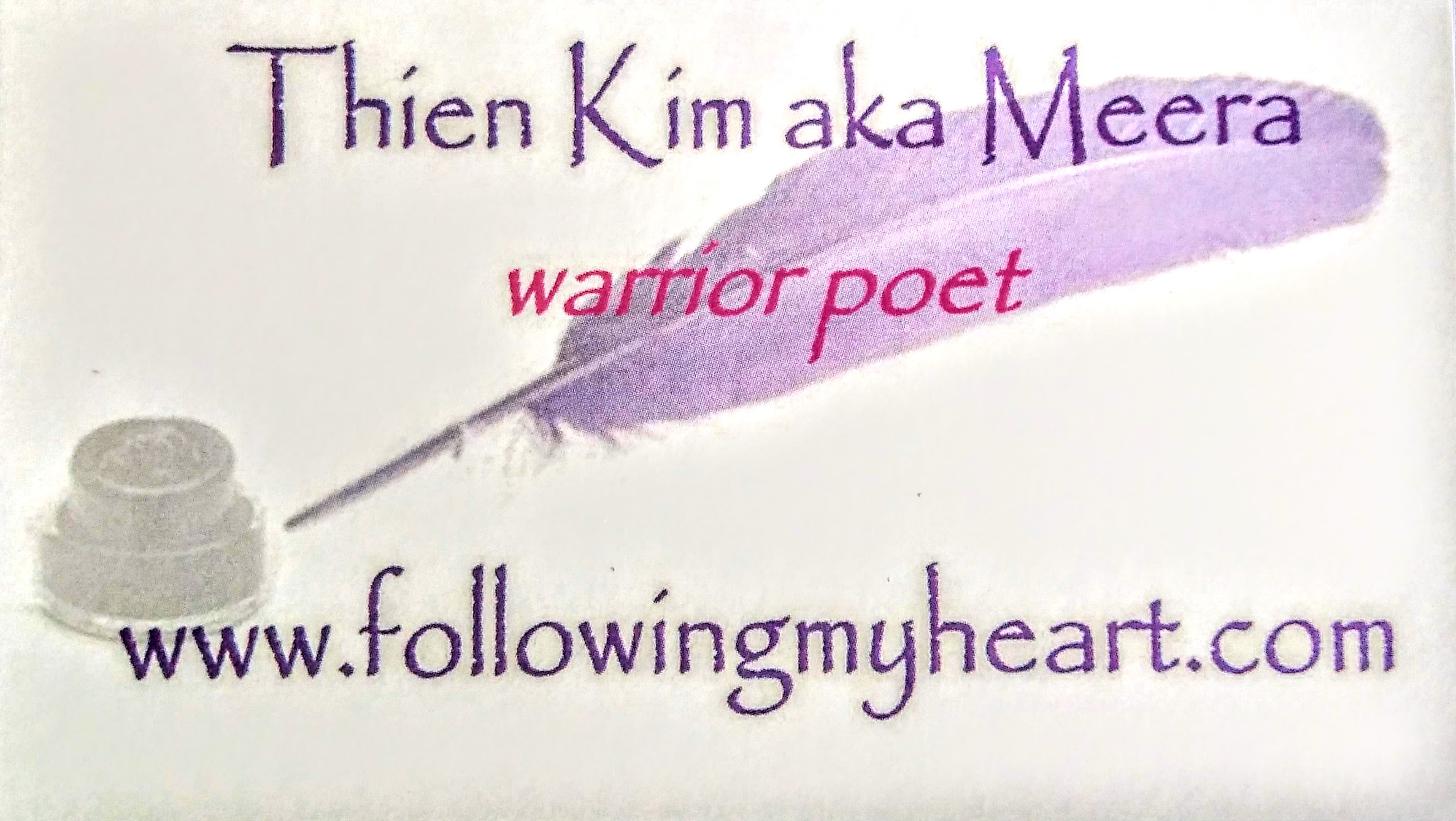 My business card that I co-designed with a good friend because she has skill sets that I don’t. HA. I get compliments on the card & web site designs all the time.

In the summer of 2013 before I left for my travels abroad, I had a long and introspective conversation with my boyfriend at the time about the significance of names in general, their meanings and the peculiar history with our individual names. When I explained to him the destiny that is carried in my name, he was profoundly moved and encouraged me to start going by “Thien Kim” and so I did.In fact, the significance of my name is fitting for the massive rebirth I have been undergoing ever since then.

It’s as if I’m reclaiming my native Vietnamese heritage in this “land of the free” because I’m starting to fully appreciate where I come from. Better late than never, I suppose!  “Thien Kim” is my full first name given to me at birth by my dad and as with long names in any culture, mine was shortened. It’s just one of those things we accept blindly in life until one day, something arises in us that questions why something is the way it is. I took a spiritual approach to understanding the significance of my name.

I introduce my Vietnamese name as a compound first name and that seems to stick with people. A compound word means that it takes two words to make one word. So my first name is made up of two words, or names if you will, to make one name. Get it? The “H” is silent when pronouncing it.

From a spiritual perspective, it’s as if in a way I was always there but was not allowed to be truly seen or something like that. And it’s also as if I finally woke up to discovering my true identity, or destiny in my case, and I’m never falling back asleep again! You have no idea the magnitude of illusions I have had to shatter, from agonizing childhood memories to facing my own fears throughout my nine months abroad, with regards to understanding the spirituality of my name. 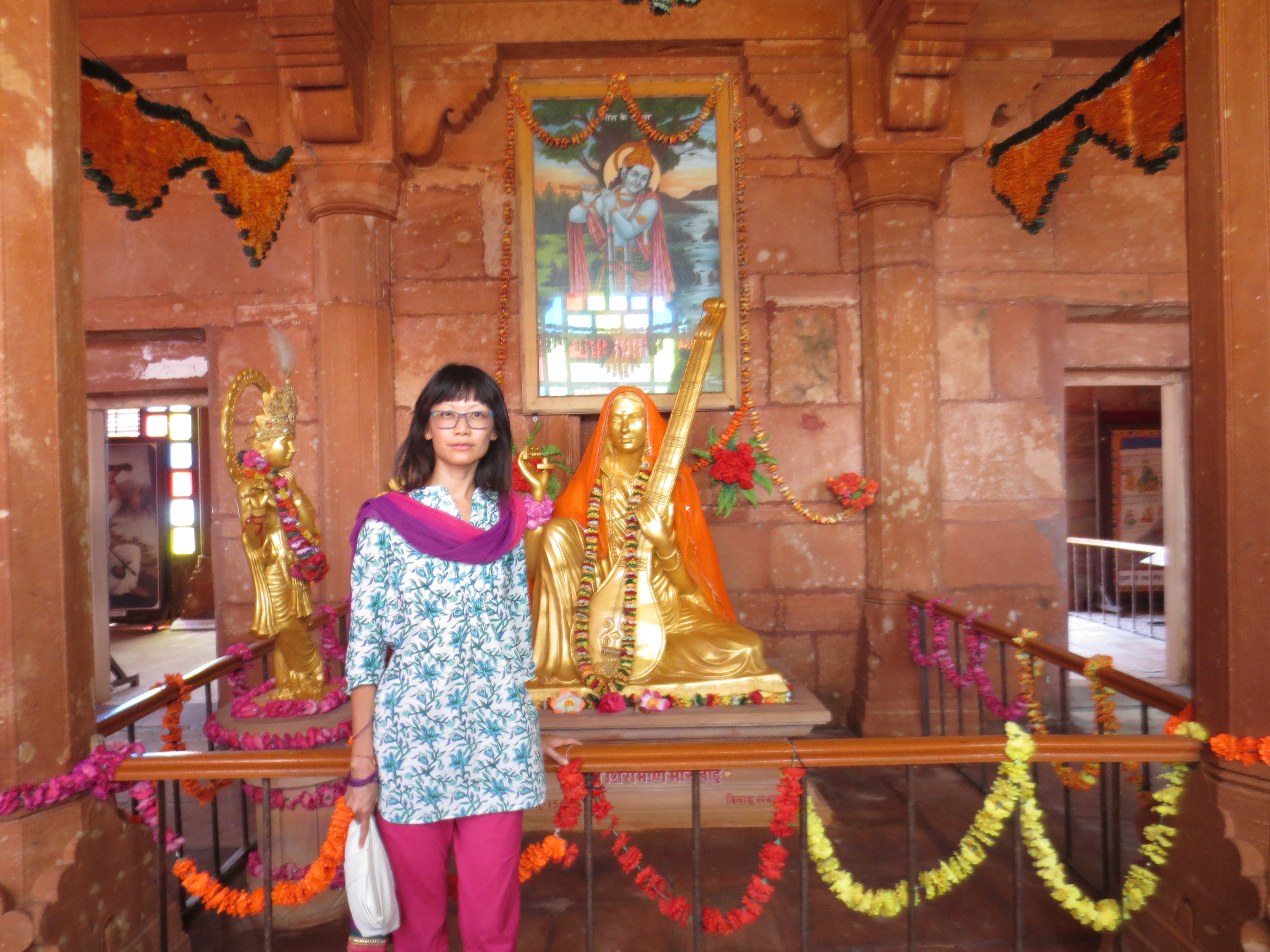 Visiting Meerabai’s temple in Merta, Rajasthan was a surreal dream come true that hits a lot closer to home than you realize.

As if that weren’t complicated enough, I also adopted another name during my travels! When I was in India in 2014, it became apparent to me that the Indians could not pronounce my name, Thien Kim. I was so devastated! Within my first three weeks, I was given a Hindu Indian name, Meera, by a kind Indian man who wanted to make life easier for me during my time there. I’m so happy he did because I ended up staying in India for nearly five months and everyone loved my name! Every time I introduced myself as Meera, I observed people’s responses to my name. Sometimes I could see judgment fade away as a smile would light up on their face. Sometimes I got looks of approval or acceptance into their cultures, which were foreign yet fascinating to me. Even my western backpacker friends know me as Meera! But what I loved most was how comfortable I felt with that name!

So after meeting the man who named me, I then serendipitously met a large group of high school students on a trip with their teachers. As I started to introduce myself as “Thien Kim,” the man who had named me immediately yelled out, “Meera! Her name is Meera!” Well, everyone was greatly impressed then and what they told me next astounded me deeply and personally.

Meerabai was a queen of Rajasthan 500 years ago and her devotion to Lord Krishna made her one of the most reputable saints in Hindustani history. She is remembered for her bhajans, or songs of worship, to Krishna and she wrote countless poems professing her love and herself to him. 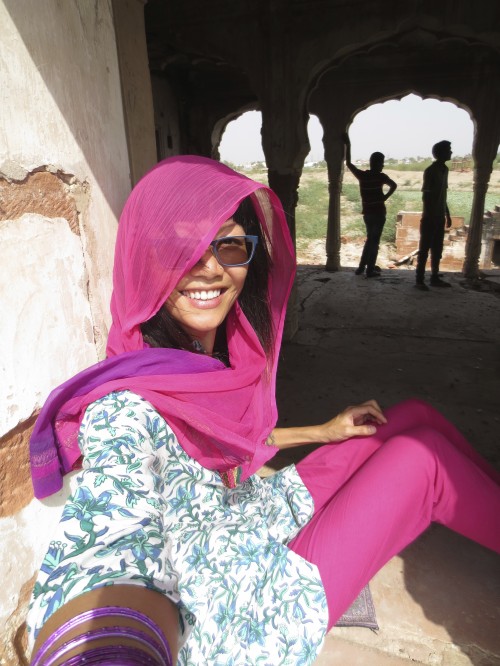 What a fascinating journey of trust and faith that led me here to Meerabai’s birth home in Rajasthan. It felt like coming home after years of searching my way home. To know such peace again will be worth another adventure.that my heart is more than ready for.

From that point on, I only introduced myself as “Meera” to everyone I met in India. I never anticipated any of this happening! I was quickly and unknowingly growing into that name in many ways. For instance, I began channeling poems and prayers worshipping The Most High. And it’s as if I go in a trance each time that it overcomes me, this state of oneness with Him. It’s a most delicious high and peace my heart has ever known. Our connection supersedes all intimate relationships I’ve ever been in when I thought I was in love. It’s the closest thing to what I imagine enlightenment would feel like, I guess, and if that’s so, my heart can fully appreciate the historical pursuit of man in search of such heavenly bliss. Being in love with The Most High Creator is the ultimate state of love, the true liberation of man. All man. Of any race, creed, color, sex, religion, class…Did I cover all the bases?!

This self-discovery forced me to re-evaluate everything I had ever learned about world religions because you see, I was baptized Baptist at a young age but raised Buddhist in our Vietnamese home, a paradoxical fact about my unique upbringing that hardly anyone knows.

I wanted to know more and more about Meerabai because I found many parallels between her life and my life. So I visited her birth place; her palace and temple in Fort Chittor; and even to the temple in Dwarka where she was last seen merging into Krishna’s being as she left this life. Meerabai had faced persecution from her in-laws because she would not change her faith to theirs and basically because she was just different from them. Her faith in Krishna only deepened in these times and her prayers healed many people she encountered.

The funny predicament I’ve found myself in is that I now have a separate identity and she exists primarily in India. When I talk to my Indian friends and families, those are the brief times that I remember that, yes, I am Meera.

It’s very peculiar how the vibration of a name can impact our body language, our speech, our entire being. Vibrationally speaking, both “Thien Kim” and “Meera” are one in the same identity yet they are also separate from one another. It’s a fascinating experience to feel as if I am carrying two different identities within the same physical body (big mind trip!) yet vibrationally and spiritually speaking, the soul remains unchanged.

Upon returning home to the states, my street friends serendipitously dubbed me “warrior poet” since sometimes we forget to ask for one another’s names when meeting and because I am known for randomly sharing my poetry on the streets with them. Actually, poetry runs in my blood since I come from a family of great poets, but it wasn’t until my personal journey with my poetry seriously began that I unlocked that hidden family secret.  I vow to become the first in my family to be truly discovered.

So why did that kind man name me “Meera” after all? It was the closest meaning to my Vietnamese birth name, “Thien Kim,” that he could think of.  “Thien” means “heaven/the heavens /angel/goddess” and “Kim” means “gold.” He said “Meera” means “angel” but other Indians told me that it doesn’t mean that. So perhaps, I think, he named an actual angel on earth and her name is Meerabai. Previous to fully understanding the significance of my name, I was anything but an angel. I long to become one with Meerabai as I strive to live up to my birth name more and more every day, calling my destiny to me in this lifetime. 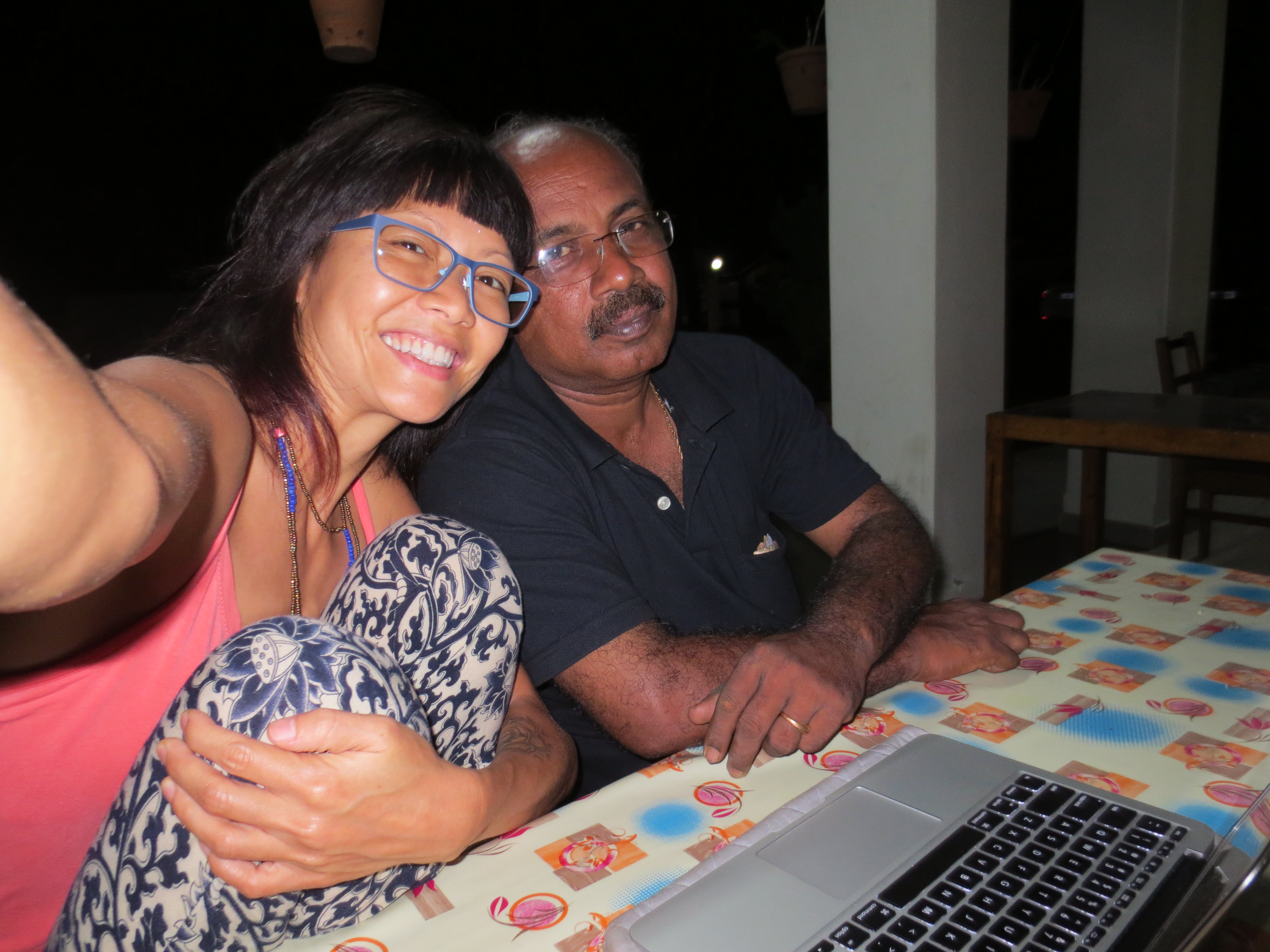 I never got the kind man’s name who named me