After being abroad for nearly a year, I returned home to the states in 2010 and subsequently got hurt very badly in the car accident that would change my life forever. Quite a few people have told me that my story of pain and triumph reminds them of Frida Kahlo’s fateful bus accident that too changed her life.

From that accident, I was eventually diagnosed with a mild traumatic brain injury (MTBI) and I was suddenly thrust into a black hole that was foreign and very frightening to me. The first three years of this long journey thus far,  I lived in this black hole virtually alone with occasional glimpses of light beaming in. My previous paradise life was rudely and abruptly yanked away from me as I had to deal with recreating paradise in this black hole. 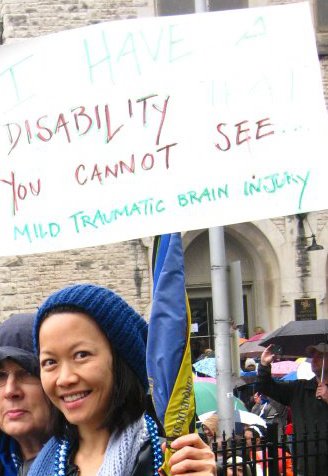 My challenges as a TBI survivor have molded me into being an advocate for education on, public awareness about, and deserved government funding for brain injuries. Now that I have found my voice, literally and metaphorically speaking, I am committed to speaking on behalf of my fellow TBI/ABI survivors and particularly for the thousands, and perhaps millions, of survivors who’ve not found a way out of the black hole yet. Please allow me to serve as your light out of the darkness. I have been there for more than ten years. I know what it’s like to be in your shoes because I have walked in them too!

I learned so much about compassion from this particular journey and it opened up my heart so much more! All the groups of people and situations I had previously and harshly judged at different points throughout my life, I somehow serendipitously found myself in! Talk about a reality check with myself! I legitimately have not been able to work and thus qualified for food stamps; the half-fare public transport card for people with disabilities; and utility assistance. I’ve had to rise above judgments or curious looks whenever I would pull out my food stamps card at stores or farmers markets because I know what the illusion looks like to them, but they have no idea of my journey.

You see, my injuries are not visible to the naked eye. In the medical field, it is commonly known that MTBI survivors are largely ignored because we look normal on the outside. I have faced some of the harshest persecution ever in my life because of this inconvenient truth. About a year into my journey, I finally realized that a brain injury is in fact a disability and it was as if a lightbulb had gone off in my head. Couldn’t someone in the medical field have clued in me from the beginning??? Sure, they told me I had a head injury but I didn’t know what that even meant even though I was the one living with it! I researched nonstop and talked to anybody and everybody about brain injuries, and nowhere in my research was it called a disability! I don’t know why but when I realized what category it fell under, everything suddenly made sense to me and from that point on, I became even more empowered in turning my life around.

From an early age, I have been accustomed to fighting for my life and I have always survived. Recovering from my brain injury became the most significant battle I would eventually win, and it took me stepping up and asking for help from anyone and everyone, whoever had ears to hear my pleas.  The  first three years were the darkest years of my life and it really, really bothered me that the masses, especially the legal and medical fields, remained obnoxiously oblivious to the day-to-day challenges of BI survivors. People expected me to educate them, but I had no idea what I was really going through!  I just knew that I was changed, and that it was critically important to understand as well as to adapt very quickly to these overnight changes that no one could have prepared me for. 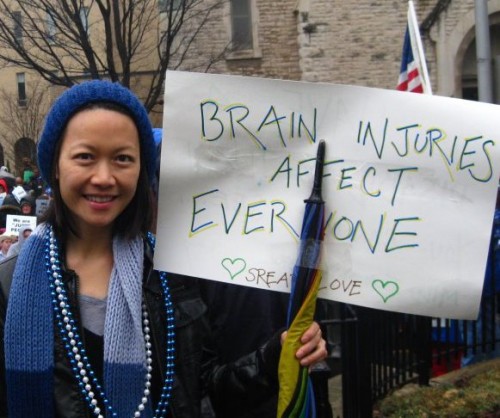 A harsh reality and WAKE UP CALL to all of humanity no matter where you live.  SPREAD LOVE to BI victims and survivors because it is literally our saving grace.  Don’t wait until it’s too late for you to actualize this message.

It was always my dream to share my story as a brain injury survivor to the world because I feel that it is critically important for others to understand because brain injuries can happen to anyone, anywhere, anytime. I had to find out the hard way and I always vowed that if I can comfort or help others on this journey, then I will have done my part. To have found my voice again when countless are still trapped inside their bodies, I feel that it is my life-long duty to educate, raise awareness, and heal as many as possible. Is that not why I was given my voice back???