On 24 September 2010, I was badly hurt from a car accident that would quickly change my life forever. I was driving only about 30 mph on this beautiful Friday afternoon when a commercial truck suddenly made a left turn, cutting me off rudely on my green light. There were cars all around me and not wanting to risk anyone else’s life, I quickly accepted my fate literally in front of me so I gently stepped on my brake as quickly as possible. I knew the brake was critical to get right but there was not much time or space to work with, and so my car T-boned into the truck just as I knew it would happen.

I remember being banged around a lot in the car but I still don’t remember what my head hit exactly. It is believed that my head hit the windshield because in a couple of photos of the car, there are visible dents where my head is believed to have hit. The hood of the car immediately caught on fire and that fate was something I was not willing to accept, so I grabbed my purse and flew out of the car as if my life depended on it! The truck driver and I stopped to acknowledge one other, and our eyes locked and he immediately apologized, “I am so sorry! I did not see you coming!” I let my eyes speak and forgive him right away because I knew he didn’t mean it, but no words could be formed from my mouth. It was as if I had become paralyzed.

And then an angel appeared as I was lying on the sidewalk and being the perfect gentleman that he was, he put my purse between my legs because I was wearing a skirt. In hindsight, I guess my head was hurting a lot and that is why I intuitively laid down but for the next couple of years, my accounts of my head pain changed constantly because I was figuring out how to gauge the different levels of pain and types of headaches. This was foreign territory for a healthy, young woman. My kind angel was a professional truck driver and he told me that truck drivers are trained to put out fires, and he just happened to have a fire extinguisher on hand that he used to put out my fire. Would my car have blown up if he had not been there and would more people have been hurt? He was right there on the scene before the police or paramedics came, and I credit him for saving my life.

I asked my kind angel, Larry, to stay with me until the paramedics came and he even held my hand. I’m so thankful that he stayed with me because they treated me as if I were an idiot and even asked if I could speak English! I know this infuriated Larry as much as it did me! Inside my head, my sarcastic retort was this, “My English is better than yours!” but this strange paralysis imprisoned me in many agonizing ways that my voice abandoned me. This was the first sign for me that indicated something was terribly wrong.

They strapped me on a stretcher very tightly and I kept asking them to loosen the grip because my head, particularly the back, was so tender and hurting badly. I was whisked away to the ER to a nearby hospital, where I was left in the busy hallway, largely ignored though everyone had to pass me for over an hour. I begged them again to loosen the grip and I think one of the paramedic guys finally softened up and took pity on me.

When the hospital insurance people came to see me, I found my voice when they kept getting my name, Thien Kim, wrong because I kept fighting with them to get it right! My name is EVERYTHING to me. I would not accept my name hyphenated or joined together or shortened simply because their “computer systems did not allow anything else.” I know they were looking at me as if I were crazy, but head injury or not, I know what my name is and it holds much significance for me! 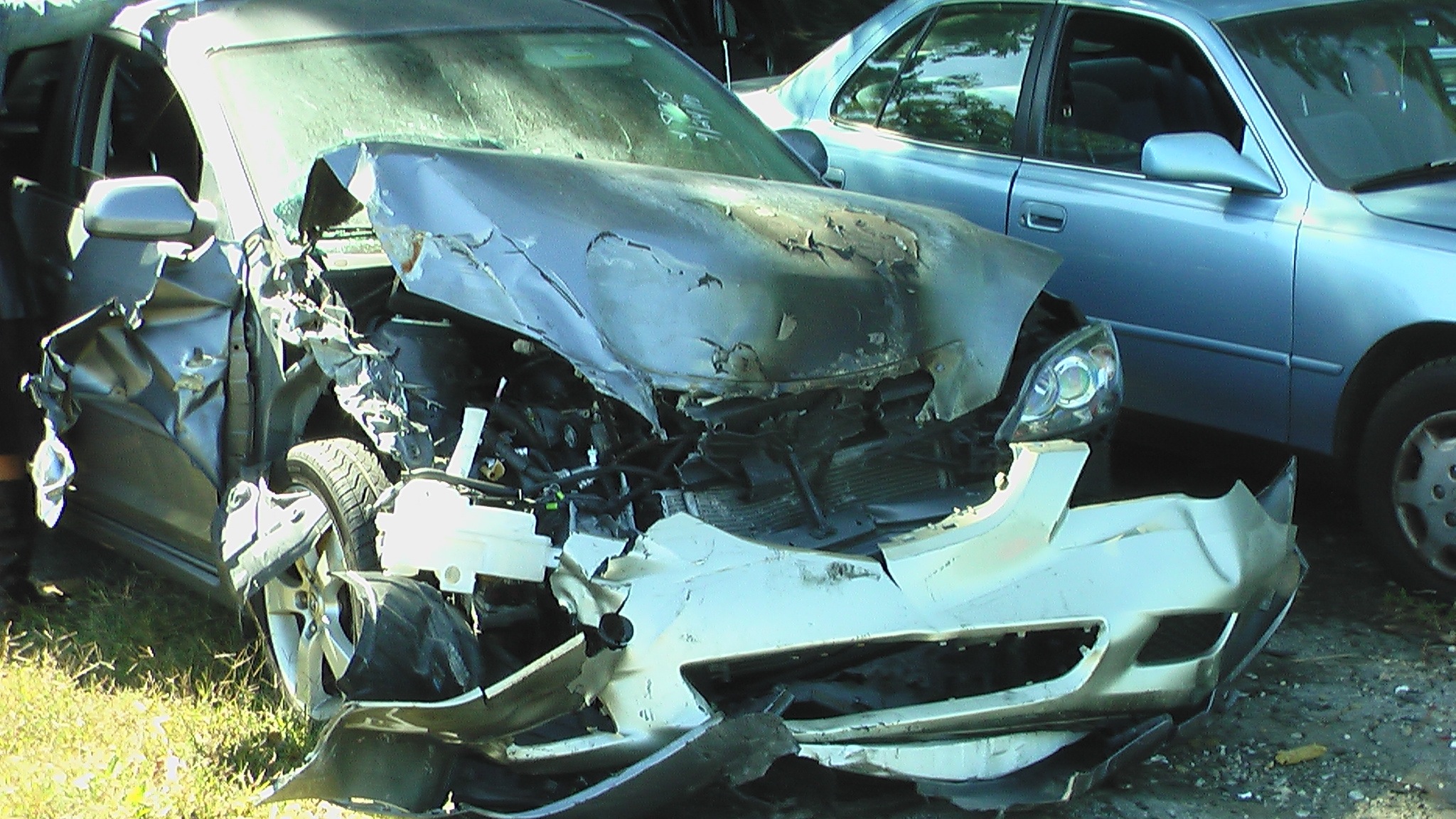 My first time publicly sharing this photo from that fateful car accident.  For 3 weeks it sat at an impound while my attorney’s office was having difficulty locating it.  To walk away from such a horror “without a scratch on my body and in one piece” was indeed a miracle and I was beyond thankful for LIFE when I came face to face (again) with how otherwise my fate could have turned out.  But inside, my BRAIN was different because it was sloshing all over the place.  To the outside world, there is nothing wrong with me.

In the early months of my brain injury, I had no idea what had happened to me or what I was really going through. Nothing made sense but I knew that I was suddenly different. Everything was suddenly different in fact. I didn’t know who to talk to despite all the doctors and attorneys I was dealing with. I felt so alone because it felt as if everyone were telling me how to feel and what to do, but their advice was unsolicited and honestly ignorant and un-compassionate of the intense pain I was in. There are parts of having a brain injury that feel like an illness, a disease, and some sort of unexplainable “condition” all rolled into one. At times I even wondered if somehow my brain had regressed because I felt really retarded about many things that had previously made perfect sense, and learning new things was painstakingly arduous that often left me in frustrated anxiety attacks or utter defeat.

Feeling defeated was very strange for me and I vowed in the beginning that I would overcome this brain injury. I always said that it was the Eightfold Path that kept me focused on my healing because I would not allow myself to succumb to the plethora of medical issues I had suddenly found myself engulfed in: PTSD; cognitive disorder; mood disorder; insomnia; migraines and all kinds of headaches; agoraphobia; sleep paralysis; silent seizures; and a slew of physical injuries as well. What really frightened me was that for the first time in my life, I contemplated ending my own life many times. This was a big secret I kept virtually to myself as I continuously put a smile on my face for the world to see. I was CRYING FOR HELP to anyone who could hear me, but I was astounded, confused, hurt, saddened, angered, and disappointed that no one seemed to hear me or take me seriously. I knew then that the only person who could help me was ME.

There were two dreams of mine that kept me alive and motivated on healing fully. The first dream was to get myself to a beach, any beach, anywhere. My body had a burning desire to be on the beach and this is a testament to the healing powers of the ocean because many TBI/ABI survivors feel pulled to be near the ocean. The second dream was to heal myself through Ayurveda rather than subject myself to the invasive and problematic western procedures that go against my holistic principles (and common sense!). The first dream serendipitously took me to St. Kitts in the West Indies for a couple of months and the second dream landed me smack in India for nearly five months. To seek Ayurveda, my heart knew I needed to brave up and go to India, a country I had actually resisted visiting for years. These two trips transformed me in unimaginable ways and all I can say is that I am so happy that I followed my heart the whole time.

For the sake of the lawsuit, I did everything that was required of me as much as I could without sacrificing my holistic principles, but I always knew in my heart that once I was strong enough, I would take off to heal myself in my own ways. I prayed that my health was stable enough to just get on the plane. For the first few months, my health fluctuated dramatically but I was determined to overcome all obstacles. Many people did not believe me when I shared my dreams of healing myself on the beach, and many people did not know what Ayurveda is and therefore doubted its healing powers. To be out in the world again and uncaged from the imprisoned state of living, I flew and flew until I could fly no further, healing myself along the way.